Erik J. Caponi is a developer who worked at Bethesda Softworks on Fallout 3 as a quest designer and writer.

Work on the Fallout series

Caponi was responsible for writing dialogue, designing locations, crafting characters, implementing scenes and scenarios, and creating background lore for Fallout 3. His secondary duties included systems and content design. Additionally, Caponi wrote the character of Charon,[1] and served as one of the main narrative designers on The Pitt add-on, alongside Fred Zeleny.[2]

Erik started his career as a game designe Xmachina Studios in Pittsburgh, Pennsylvania, designing and implementing systems and levels for showcase from January 2001 to February 2003. He worked at Monolith Products in Kirkland, Washington, from June 2004 - July 2005, scripting stories and levels. Erik was at Bethesda Softworks from 2005 to 2009, working on Fallout and The Elder Scrolls. He took narrative positions at Big Huge Games, 2K and Ubisoft before finding his current position as game director at Relic Entertainment since 2018.

Additionally, Erik has been a rules tester for tabletop roleplaying games and a domain storyteller for Camarilla. He holds a degree in filmmaking.

“I came on pretty late in Oblivion's development. I got the change to work on a few of the Settlement Quests as well as various late-stage writing and design tasks. I was one third of the design team for Knights of the Nine and was responsible for a few of the quests as well as the final battle against Umaril's minions and the battle with his spirit in the sky over Cyrodiil. On Shivering Isles, I was responsible for Retaking The Fringe and Symbols of Office as well as a lot of freeform design. I was also the designer on a couple of the downloadable content packs.

Primarily what I do around here is known as "Freeform Gameplay." I started with it on Shivering Isles and it's now my full time role on Fallout. What it means is that I'm responsible for gameplay content that isn't related to quests. This can take the form of incidental dialog, NPC behavior, scripted scenes, town dialog, world encounters, lore, conversation systems, as well as any one of a million different things that might not be tied directly to a particular quest."

Perhaps the most limiting thing about working in a persistent world is that you can't change the world around the player's actions. You can't have an epic quest that ends up burning down a town or killing a major NPC. So the stories have to be very self contained and can’t change the world itself. This leads to things feeling very static. And personally, I like to write things that make the player look at the game world and see the effect that his actions have had on it. Having a world that needs to house several thousand players limits that.”— Erik Caponi
“It is somewhat liberating. I'm a foul mouthed guy, and the ability to let loose is somewhat satisfying. Or course, as much fun as it is to write vicious combat dialog, there's a lot more to Fallout than colorful language. The ability to incorporate situations and themes that wouldn’t really fit into the Elder Scrolls setting is enjoyable. It's not too often that you get to work with the darker side of things.”— Erik Caponi, on mature content in Fallout 3 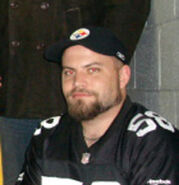 Erik J. Caponi
Add a photo to this gallery

Retrieved from "https://fallout.fandom.com/wiki/Erik_J._Caponi?oldid=3380288"
Community content is available under CC-BY-SA unless otherwise noted.