Helps Allies
“I just... started seeing things differently when we came to the island and I couldn't stand how the other super mutants act to humans.”— Erickson

Erickson or Erikson is a friendly super mutant on the Island. He came over with the mutant group that took over the Vim! Pop factory.

Erickson once was part of the super mutant war party that landed on the Island a long time ago. After a few weeks on the Island, unlike his peers, Erickson overcame the rage and hatred that burned inside him and separated from his peers. According to Erickson, this may have been due to the Fog,[1] or perhaps his consumption of Vim while he was camped at the Vim! Pop factory.[2] He began questioning their actions, such as why they were attacking humans when there was plenty of wildlife to hunt. When he brought it up with the rest of the super mutants, they threatened to kill him if he turned weak like a human. Their leader, the behemoth Grun, took a swipe at him, although the behemoth was slow enough that Erickson was quick enough to dodge it.[3] Unwilling to stay with the group any longer, Erickson devised a plan. He would lock Grun up in the basement storage area. While the others were busy trying to let him out, he would leave before they realized, going off to find someplace quiet to live on his own. If they manage to let Grun out, he would probably be so mad he would attack them.[4]

His plan was successful, and he traveled over the Island[5][6][7][8][9][10] and eventually settled in at the crashed Horizon Flight 1207, building a home for himself in the ruined hulk of the airplane. He gets by with a combination of hunting, dog breeding[11] and trading with whoever passes through his little hermitage in the wilderness.[12][13][14] He used to trade with a couple of the people of Far Harbor; however, with the Fog's encroachment, they seldom leave the settlement.[15] Old Longfellow is certainly the exception, as he is an old friend[16] and one who doesn't fear traveling through the Fog.

Erickson is an experienced trapper, even creating a bearskin outfit for himself.[17] He is also a kind and hospitable sort who truly loves dogs.[18][19][20][21]

Erickson appears only in the Fallout 4 add-on Far Harbor.

Erickson was designed by Bethesda level designer Drew Langlois. Every dog name is taken from the pets of other Fallout 4 developers.[22]

Erickson will frequently walk away from the player character while they are attempting to converse with him. This interrupts whatever Erickson is saying, and the game assumes the player character heard everything and moves to the next dialogue when they return.[verified] 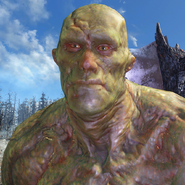