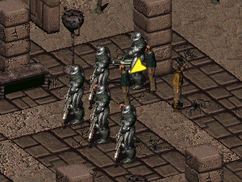 “He's banging two coconut halves together. Clip! Clop!”— An observation by the Chosen One

Eric is a human surrogate horse for Sir Robin in 2241.

Appearing in the King Arthur's Knights special encounter, he is banging coconut shells together, imitating a horse's stride.

Eric is a reference to the Monty Python Holy Grail sketch, in which the knights originally were going to ride real horses, but because of the film's minuscule budget, the Pythons decided that their characters would mime horse-riding while their porters trotted behind them banging coconut shells together.

Retrieved from "https://fallout.fandom.com/wiki/Eric_(special_encounter)?oldid=3286580"
Community content is available under CC-BY-SA unless otherwise noted.