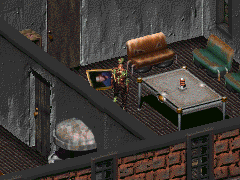 “Please! Go away and take those damn flies with you!”

Eric is a ghoul living in Broken Hills in 2241.

Eric is a greasy, sweating man.[1] For some odd reason, his body exudes fly nutrients, causing flies to swarm around him whenever he sweats.[2] The only thing that solves the problem is simply not sweating, which is the issue he is currently suffering from, as his air conditioning doesn't have enough power.[3] He was once the owner of the local hotel but was forced to sell it because of his fly problem. He then tried running the town's tavern, and later the town's generator, but was forced out of those jobs for the same reason.[4]

Retrieved from "https://fallout.fandom.com/wiki/Eric_(Broken_Hills)?oldid=3369932"
Community content is available under CC-BY-SA unless otherwise noted.