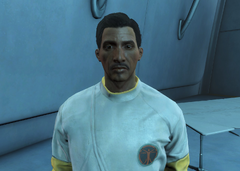 Enrico Thompson (username Thompson.E)[1] is an Institute scientist working in the facilities division in 2287.

Enrico is the husband of Janet Thompson and proud father of Julia and Alice, as he considers coming home to his daughters to be the happiest part of his day.[2] Enrico is responsible for maintaining power distribution and the internal works of the Institute, using the older technology which it was developed from.[3][4] He is also involved in monitoring the first generation synth work crews, noting that they should not recharge until two percent power and hoping they should no longer bump into walls, following a navigation software patch.[5]

During the quest Pinned, depending on the actions taken by the Sole Survivor, he will express displeasure at using aggressive methods to "recruit" T.S. Wallace,[6] he will say that the Minutemen present to protect him are out for blood, or Gunners if the former have not reformed.[7][8] Enrico will also admit that the Institute has been feeding Wallace information to test his abilities.[9]

Enrico Thompson appears only in Fallout 4.

After the quest "Pinned" he changes his coat from yellow to blue, despite still being a member of the facilities division.[verified]

Retrieved from "https://fallout.fandom.com/wiki/Enrico_Thompson?oldid=3327933"
Community content is available under CC-BY-SA unless otherwise noted.