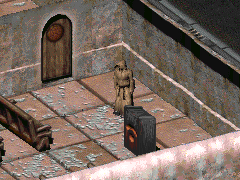 “Well, are you seeking true understanding and spiritual peace? We can help.”— Enlightened One

The Enlightened One is Church of Hubology's missionary to the New California Republic in 2241.

A striking woman in a long robe with a fixed stare and expression of mindless bliss, the Enlightened One was sent by AHS-9 to Shady Sands to spread the word of their religion. She is a level four Aligned Hub Seeker with a tranquil state of mind. However, she has found it hard to convert citizens of the NCR to her religion.

Her beliefs infuriate Merk, the local crime boss and big fish, who would like to see her dead.

The Chosen One can opt to receive a one-time zeta-scan from her, which can increase (+1 or +2) or decrease (-1) Luck, with a randomized result. This scan is mutually exclusive to those in San Francisco. She can give the player character 100 XP, if they pick "Yes," when she first asks if they're an enlightened one, and then the long humorous answer about their level. They can still get the zeta-scan after this if they wish.

The Enlightened One appears only in Fallout 2.

Retrieved from "https://fallout.fandom.com/wiki/Enlightened_One?oldid=3369925"
Community content is available under CC-BY-SA unless otherwise noted.