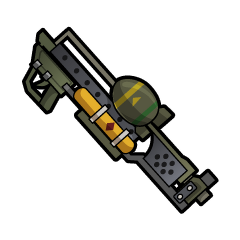 The enhanced Fat Man is a weapon that appears in Fallout Shelter.

The project hit a breakthrough in December 2076,[5] when the project lead discovered a solution for the launcher problems. Six hours, fourteen cups, and one concerned night shift lab crew later, the future M42 launcher was conceptualized: Based on the spigot mortar mechanism, the launcher would only have to accommodate a firing through and system, relying on mechanical launching, rather than chemical or electrical means. The Fat Man warhead would be propelled by a sub-charge embedded inside the warhead, "catapulting" the warhead through the air to the target - giving plenty of range with the added bonus of not producing a smoke trail that could reveal the firing team to the enemy.[6]

The enhanced Fat Man is a modified nuclear launcher featured in Fallout Shelter. Dealing 22 minimum damage per attack, it has the second lowest damage output for a heavy weapon in the game.

A high Strength statistic is needed to effectively create the enhanced Fat Man.