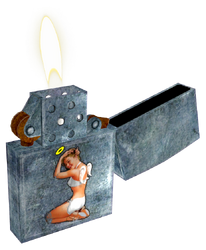 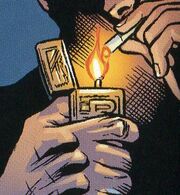 Benny's lighter as seen in the All Roads comic

“Here - a souvenir for you. It's Benny's lighter. Shove it up his ass when you catch up with him.”— Jessup, giving the lighter to the Courier

The engraved cigarette lighter is quest item in Fallout: New Vegas. It also appears in the graphic novel All Roads.

Benny used this particular lighter to light his distinctive cigarettes. He remarks that it is unique to the Mojave Wasteland and when used to light a cigarette he comments on Chance's fascination with the flame, mistaking it for a preference to pyromania, when in actuality the flame reminds Chance of the Bitter Springs Massacre.

During the graphic novel, the Khans contemplate stealing the lighter but opt out of the plan due to fear of what Vegas may do. When betrayed by Benny, they apparently carried out the plan anyway.

In the game it can be shown to Swank at The Tops casino, as evidence that Benny does not have the best interests of the Chairmen in mind.

The lighter can only be found while assisting in the Great Khans hostage situation in Boulder City, by either killing Jessup during the quest or pickpocketing it from him.

It can also be obtained by peaceful means if one decides to bribe the NCR in order to let the Great Khans go. If Jessup is convinced to let the hostages go (requires Speech of 45 or greater) he will give this item to the Courier as a "souvenir."

Retrieved from "https://fallout.fandom.com/wiki/Engraved_cigarette_lighter?oldid=3428352"
Community content is available under CC-BY-SA unless otherwise noted.