Not of This World
Among the Stars

“We need to go to the big engine thing, and then from there we can go to the top of the ship.”— Sally

The engineering core is a location onboard Mothership Zeta in 2277.

The engineering core is the third area that the Lone Wanderer encounters aboard the Mothership, and serves as a hub between numerous other locations aboard the ship, including the steamworks, hangar, cryo lab, robot assembly, cargo hold, maintenance level and engine room. Here, the player character can also find several other captives who will assist them aboard the ship. As one progresses through the main quest, the Engineering Core changes. Defenses are put up and barricades are made by the other captives; eventually a broken Nuka-Cola vending machine will show up; a teleporter to the Bridge appears near the steamworks entrance, down a corridor to the left of the Nuka-Cola machine; and a terrified alien will appear and plead for its life, only to be shot by Paulson.

The Engineering Core is one of the few rooms still available to explore after the quest This Galaxy Ain't Big Enough... is complete, as most other rooms beyond it will become inaccessible. At this point, aliens will also begin to spawn occasionally in the room.

The central power for Mothership Zeta is at the center of the map. The lower level surrounding the core contains little of interest.

The lower level is far smaller than the top level. It has a small room where Toshiro Kago sits most of the time with a large window that displays the reaches of space. There is a table opposite Kago and a foot locker near that. Across the from the windows is a hallway that has some garbage in the middle of it. Through this hallway, one reaches the main part of the lower floor. This has a main energy pillar in the middle of it, surrounded by capacitors. Also on this floor underneath the stairs is a bed for the player character to sleep on.

In Kago's room is a staircase that leads up the second level. This staircase opens to a room with random junk strewn about on tables, beds, and the floor. Going through a door on the right will take the player character to the main area with the energy pillar from the first level. This is the area where most of the captives roam. Going straight, the player character will head into the cryo research area, going to the right will let them into the maintenance level, robot assembly, or the engine rooms and going to the left will take them to the hangar or cargo hold.

The engineering core appears only in the Fallout 3 add-on Mothership Zeta.

The teleporters on this deck may stop working, while displaying the appearance of a fully active teleporter. This can be a serious game glitch permanently trapping the player character on the ship. [verified] 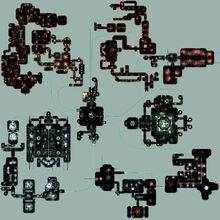