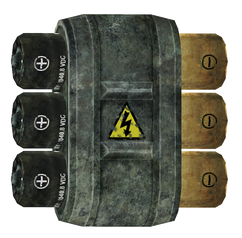 The energy cell is a type of ammunition in Fallout: New Vegas.

Energy cells are small, self-contained energy storage units often associated with one-handed energy weapons and act essentially as a very powerful battery or capacitor. They are the standard ammunition used by the majority of pistol-sized energy weapons, and as such are widely available across the Mojave Wasteland.

After firing, there is a chance that spent energy cells will turn into drained small energy cells. These are automatically placed in the player character's inventory. Drained energy cells can then be recycled back into usable ammunition at a workbench.

With the Honest Hearts add-on, drained energy cells can also be recharged using a fission battery.

Energy cells can be converted into, and from, other energy weapon ammunition types (i.e. electron charge packs and microfusion cells) at a workbench, with the appropriate Science skill.

The player character can also combine partially charged cells together to make more powerful variants that improve damage and bypass more enemy DT but will burn out the weapon's components faster.

Bulk energy cells are less potent than the standard version but are cheaper to purchase. The reduced charge results in only 85% of normal weapon damage and no Damage Threshold negation (standard energy cells negate 2 points), but also reduces the strain on the weapon as well, reducing weapon degradation rate to 85% of normal. The bulk design also means a significantly reduced chance of recovering a drained energy cell (only 20% compared to the standard 35%).

This ammunition is more powerful than standard energy cells. It increases the damage output of weapons by 25% and has a -5 Damage Threshold effect on enemies (standard energy cells give -2 to DT), but degrades weapons 50% faster than normal and only has a 25% chance to recover a drained energy cell (the normal recovery rate is 35%).

This is the most powerful of the energy cell variants. Max charge energy cells increase weapon damage output to 1.5 times normal and have an armor-piercing effect of -10 Damage Threshold, but causes weapons to degrade at 2.5 times the normal rate and drained energy cells can only be recovered 10% of the time.

Added in the Gun Runners' Arsenal add-on, the optimized energy cell causes 30% more damage, has an armor-piercing effect of -5 Damage Threshold and weighs only 60% of the weight of all other energy cells in Hardcore mode. A drained energy cell can be recovered at a higher rate than even standard ammunition (40%, up 5% from standard). The only drawback is a 10% increase in weapon degradation. It requires Vigilant Recycler and can only be crafted at a workbench. This type of energy cell is superior in all properties compared to overcharged energy cells.

Displacer gloves and zap gloves have a visible energy cell inserted into the back of the gauntlet which presumably are the weapons' power sources, though no energy cells are required or consumed when using the weapons. This was intended to be a requirement but wasn't supported by the game's engine and wasn't implemented in time for release.