“Stamina and physical toughness. A character with a high Endurance will survive where others may not.”— Fallout In-game description

Endurance is one of the seven primary statistics in the SPECIAL system.

Modifies: Hit Points, Poison & Radiation resistance (but not damage resistance) and the Big Guns and Unarmed Skills. Endurance also determines the speed the character's oxygen counter counts down when they are holding their breath underwater.

Endurance determines a character's environmental resistances (poison, radiation), Hit Points, and Healing Rate, as well as the starting levels of the Unarmed and Survival skills. It also determines the number of implants allowed.

“Endurance is the measure of overall physical fitness. It affects your total health and the action point drain from sprinting”

Modifies: Hit Points and the rate at which Action Points deplete while sprinting.

If E is the Endurance level and L is the current character level, then

where the total is rounded down.

In Fallout 4, Endurance is applied retroactively: Increasing it later on in the game will still reward you all the hit points you would have gained with a higher initial statistic. An Endurance of 10 will grant you 7.5 HP per level (or 7 and 8 every other level, since health is rounded down). It is possible to increase Endurance beyond 10 permanently, for example by picking up the Endurance bobblehead or using the You're SPECIAL! book after reaching maximum Endurance, which will allow the player to gain even more HP per level. Hit points are in no way capped.

If E is the Endurance level, Action Points are drained at the following rate while sprinting:

In other words, 1 Endurance is equal to a default Action Point drain rate of 12 AP per second, with a reduction of 0.6 AP per second for every additional level of Endurance. At 10 Endurance, the drain rate is 6.6 AP per second.
With rank 3 of the Moving Target perk, the 12 multiplier is changed to a 6.

The values in the above formula are defined by the following game settings:

21 Endurance will reduce sprint AP drain to zero, regardless of AP cost-reducing perks and armor mods.

“Endurance is a measure of your overall physical fitness. It affects your total health, the Action Point drain from sprinting, and your resistance to disease”

Modifies: Disease resistance, Hit Points and the rate at which Action Points deplete while sprinting.

As with other Fallout 76 SPECIAL attributes, endurance has a maximum of 15 but there are only 49 points split between the 7 attributes.

Note that all stat boosts in Fallout 76 are temporary.

On each level-up Dweller's maximum HP increases according formula:

By training Endurance in fitness room.

Unlike other games, Endurance is not treated as a variable ranging from 1 to 10, but instead as a token that can be obtained at the start or when leveling up. A player character with the Endurance token gets free rerolls during certain tests, as well as during fights if equipped with an Endurance-based weapon. Endurance is also used to resist addiction when using drugs.

Any player character wearing T-60 power armor is treated as having Endurance. During Endurance tests or fights, the vault suit gives its wearer one additional reroll, while anyone wearing the hazmat suit gains one free hit. Also during any Endurance test or fight, Buffout can be used to gain one free hit. 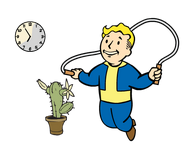 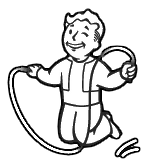 Retrieved from "https://fallout.fandom.com/wiki/Endurance?oldid=3414851"
Community content is available under CC-BY-SA unless otherwise noted.