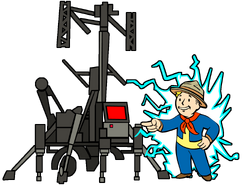 “A rogue creature is terrorizing Appalachia”

Event: Encryptid is an event quest in the Fallout 76 add-on Wild Appalachia.

The event summons an sheepsquatch (a modified assaultron) and a constantly respawning horde of various other robots to defeat. It requires the party to activate pylons nearby to remove the shields that make the sheepsquatch invulnerable before killing it to complete the event.

The event ends once the sheepsquatch is killed. At that point, further robots will not spawn, but those who were already spawned will remain active and hostile to party in the area.

Retrieved from "https://fallout.fandom.com/wiki/Encryptid?oldid=3021062"
Community content is available under CC-BY-SA unless otherwise noted.