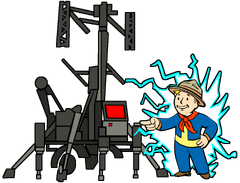 “A rogue creature is terrorizing Appalachia”

Event: Encryptid is a public event in Fallout 76, introduced in the Wild Appalachia update.

The event starts when a player character uses the terminal at the pylon ambush site. Starting the event requires an Assaultron recall keycard to be in one's inventory, and can only be activated if the event has not occurred on the server for at least three hours. Starting the event spawns a three star legendary Imposter Sheepsquatch and a horde of other robots to attack any Dwellers in the area. The robots include Mister Gutsies, Protectrons and Eyebombs, the latter which move in swarms and explode on death.

The event completes once the Imposter Sheepsquatch is killed, or fails once the event timer expires. Further robots will not spawn but those which are already present will remain active and hostile.

Retrieved from "https://fallout.fandom.com/wiki/Encryptid?oldid=3497491"
Community content is available under CC-BY-SA unless otherwise noted.