FFEnclaveCamp08FlamerNPC.txt (with flamer, sw of Vault 92)

Enclave soldiers are the fighting force of the Enclave in Fallout 3.

Enclave trainees can be found at certain Enclave outposts after The Waters of Life, doing push-ups under the supervision of an Enclave officer. Trainees are equipped only with laser pistols; they do not wear helmets, and their power armor is in poor condition.

Regular Enclave soldiers wear Enclave power armor, and are usually armed with laser rifles and laser pistols. On rare occasions, they can also be equipped with flamers or rippers and sometimes can carry a plasma rifle. They also carry a random chem, like Psycho or Buffout. After downloading Broken Steel, these particular soldiers become rarer (especially at higher difficulty levels and after completing the main questline) compared to Enclave soldiers with Tesla armor or Enclave Hellfire armor.

As their name suggests, these Enclave soldiers wear Tesla armor and are usually equipped with plasma rifles. They may also carry miniguns, Gatling lasers, or missile launchers.

They become more common at higher levels, and can replace regular soldiers in Vertibird drops. They also appear in fixed locations (such as in front of Alexandria Arms), or as Colonel Autumn's bodyguards. They are considerably tougher compared to regular soldiers, thanks to their superior armor (which is usually at near-top condition, no less) and their tendency to carry heavy weapons more often than other classes of Enclave soldiers.

Enclave Hellfire troopers are a new variant of soldier added by the Broken Steel add-on. They wear Enclave Hellfire armor and are equipped with heavy incinerators. They also carry a plasma pistol as a sidearm.

The Broken Steel add-on also adds regular Enclave soldiers armored in Enclave Hellfire armor. They wield plasma rifles and have the same stats as the Hellfire troopers, but are just called "Enclave soldier" in-game. At the Very Hard difficulty level, they are tied with their Tesla armored comrades in being the most common Enclave soldiers (it seems equally likely to encounter both varieties). This can be a problem for unprepared players due to their tough armor, hard-hitting plasma rifles, and a large amount of health. It does, however, make spare parts for Hellfire power armor easier to come by. 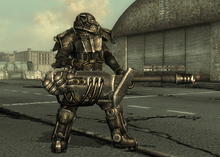 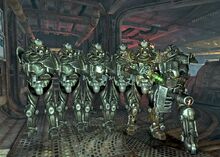 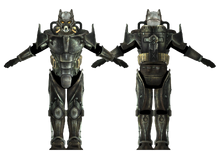