Enclave scientists are members of the Enclave's Research and Development Division in the year 2277.

Enclave scientists perform research and development into new and improved weaponry solely for the Enclave. Wearing a white, airtight environmental suit with an orange Plexiglas visor, they are easily identified among the Enclave's personnel. Although they are armed with AEP7 laser pistols and have had moderate combat training, they very rarely make actual use of this; with few exceptions, virtually every Enclave scientist will flee rather than fight. They are, without a doubt, the brains to match Enclave soldiers' brawn.

Enclave scientists can be found working on their projects at several Enclave bases, such as Raven Rock and the mobile base crawler. 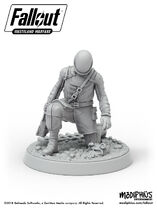