Enclave power armor is a general term that refers to various models of power armor used by the Enclave forces. All of them, aside from the X-01 power armor and the T-51b power armor, which remained in active use at least until 2242, were created by Enclave engineers and scientists after the Great War.

The T-51b powered Infantry armor represented the peak of armored infantry technology before the Great War, developed in the laboratories of the West Tek Research Facility. At the end of the Anchorage Reclamation in January 2077, the armor had become standard issue for American soldiers in the Army's Mechanized Cavalry Regiments. Now, only the most technologically advanced factions with ties to the pre-Great War American military or federal government, such as the Brotherhood of Steel or the Enclave, have access to this type of power armor.

The armor is fitted with a back-mounted TX-28 MicroFusion Pack which generates an output power of 60,000 Watts to power the HiFlo hydraulic systems built into the frame of the suit. Made of a poly-laminate composite, the outer shell of the T-51b is lightweight and capable of absorbing over 2500 Joules of kinetic impact. The 10-micron-thick silver ablative coating can reflect laser and other radiation emissions without damage to the composite subsurface. The armor usually carries enough fuel to last for one thousand years.

The X-01 is an experimental Enclave power armor. It has very good ballistic resistance and excellent energy and radiation resistances. It is not easily damaged. When crafted, it is labeled "Prototype X-01." Functionally, Prototype and standard X-01 armor are the same except for the paint job.

The armor was created by the Enclave's skilled team of engineers and scientists after the Great War, as a result of a research program initiated in 2198, part of a larger project to develop various technologies. In 2215 the first suit capable of out-performing the aging T-51b is manufactured, entering service in 2220. Various accidents, explosions, and deaths involved in its creation are classified by order of the Enclave's President Dick Richardson for the sake of morale.

It is composed of lightweight metal alloys, reinforced with ceramic castings at key stress points. The motion-assist servo-motors used in the armor appear to be high-quality as well, giving the wearer a +4 strength bonus. The suit has an auto-gyro system to keep it upright and the knees can be locked in position, to prevent the wearer from falling over, if he loses consciousness (i.e. takes a nap) on duty.[1] Additionally, like the T-51b, it includes a recycling system that can convert human waste into drinkable water, enhancing survival.[2]

Like its older counterpart, the Mk II version is matte black with a menacing appearance, but with a few significant differences. It is composed entirely of lightweight ceramic composites rather than the usual combination of metal and ceramic plates, with a back-mounted power pack, instead of the built-in ventilated power unit of its predecessor.

Early versions used under the command of President Dick Richardson in 2241 used a similar design to the standard advanced power armor. However, following the destruction of their oil rig headquarters, the Enclave forces who made their way to the Capital Wasteland had redesigned its appearance by 2277, while keeping the "advanced power armor Mk II" designation.

Unlike the pre-War Tesla armor, this armor is a variant of the Enclave's advanced power armor jury-rigged with a Tesla device that is capable of dispersing a large percentage of the damage done by directed-energy attacks. Additionally, the armor makes the operation of energy weapons by the wearer easier, boosting the energy weapons skill of the operator.

The only known suit of this type is the Gannon family Tesla armor.

This armor is a variant of the Enclave's advanced power armor, Mk. II, outfitted with a Tesla device that is capable of dispersing a large percentage of the damage done by directed-energy attacks. Additionally, the armor makes the operation of energy weapons by the wearer easier, boosting the energy weapons skill of the operator.

This armor is the result of a post-War research and development project undertaken by the Enclave. An early iteration was completed by October 2080, and was shipped to Vault 51 at the behest of the vault's ZAX computer[3] while the final mass-produced version would see large scale deployment in 2278. Initially, the mass-produced armor was one of several concurrently active research projects taking place at the Adams Air Force Base, including one on eyebots and a material called Duraframe, but ultimately came to be the most in-demand project fully completed; other projects, much to the chagrin of researchers such as Whitley, were canceled in favor of the new model of power armor by Colonel Augustus Autumn.[4]

As state-of-the-art power armor, it is conclusively the best and most advanced model of power armor there is. It provides its wearers with more protection than any other form of armor produced post-War, due to its unique Duraframe components and high resistance to heat.

An incomplete power armor project pioneered by the Enclave in conjunction with Poseidon Energy. According to initial tests, it had defensive capabilities above and beyond any other infantry armor in use before the Great War. 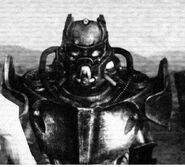 Tesla power Armor
Add an image to this gallery

Retrieved from "https://fallout.fandom.com/wiki/Enclave_power_armor?oldid=3294544"
Community content is available under CC-BY-SA unless otherwise noted.