Cannot be dropped, traded, or sold

Cannot be dropped, traded, or sold

The Enclave officer uniform was handed out to those in the Whitespring bunker who were at the rank of brigadier general or above in the United States Armed Forces.

The uniform consists of a dark blue overcoat, worn over a gray shirt and tie, two-tone pants, black boots. Enclave insignia can be seen on each shoulder of the uniform, with two stars at each top corner of the patch. On the hat is another Enclave patch. 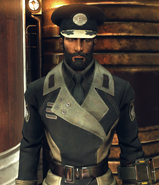