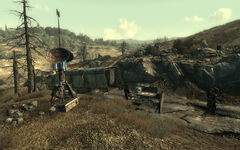 Enclave field report is a holotape in Fallout 3.

It can be found on a terminal at an Enclave camp southwest near Vault 92, just on the outer outskirts of Old Olney.

Field Report - Prepared by NCO J.Tuckman by audio dictation on behalf of PFC Matthew Scott. PFC Scott’s voice is the only source recorded in the following text.

<<BEGIN FILE>> Sir, I encountered three Ferals on my patrol. This was somewhere around 0300 hours, I think, and it was dark, so they saw me first. I discharged my firearm four times, fatally striking two of the three. My weapon jammed before I could fire on the third target, just then I realized it wasn’t engaging. I knew our orders were to report on anything unusual, and well -- I thought that was pretty strange. He actually followed me back on his own. We put him in the trailer with the other and he's been quiet as you like. Strangest thing I’ve ever seen. << END FILE>>