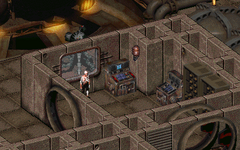 “You had to get out? Why? You're on the coast. You got great defenses. I didn't hear anything about that....Hey Hey Hey, who the hell is this anyway?”

He is a soldier of the Enclave in charge of monitoring communications to and from the United States mainland.

The Chosen One can connect to a video feed coming from the active PoseidoNet Station: "Control Station ENCLAVE" in Gecko's nuclear power plant via the reactor maintenance terminal. The video feed only functions one way, so they can see the Enclave officer, but he has no idea who he is talking to. The conversation can lead to the communications officer disclosing the existence of the President of the United States and/or Navarro.

Irritating him at any time during the conversation will cause him to trace the signal to the Poseidon Atomic Reactor #5, and he states that he has deployed a Vertibird assault team to Gecko. However, the assault team never arrives, at it was never properly implemented.

Enclave communications officer appears only in Fallout 2 as a talking head.

With 50% in Science, during the conversation with the communications officer, the Chosen One can say "Uh, we're all fine here. How are you?", a reference to Star Wars IV: A New Hope where Han Solo tries to fool an imperial communication guard.

"You had to get out? Why? You're on the coast. You got great defenses. I didn't hear anything about that....Hey Hey Hey, who the hell is this anyway?"

"Huh, ain't it the truth. Just don't let anyone who's got the President's ear hear that. You'll be making cattle-runs to New Reno 'til the end of time, pal."