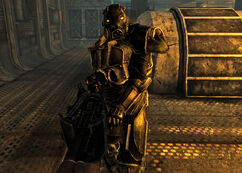 Enclave Sigma Leader without his helmet

The Enclave Sigma Leader is an Enclave military officer and Hellfire trooper serving at the mobile base crawler in 2277.

He is the leader of Enclave Squad Sigma, a special Enclave unit assigned to protect Adams Air Force Base, and is encountered inside the crawler. He is the only Hellfire unit in the Sigma squad. The squad itself consists of about 5-6 soldiers.

He has no unique dialogue of his own, instead having the same voice pack used for generic Enclave Hellfire troopers.

Retrieved from "https://fallout.fandom.com/wiki/Enclave_Sigma_Leader?oldid=3342614"
Community content is available under CC-BY-SA unless otherwise noted.