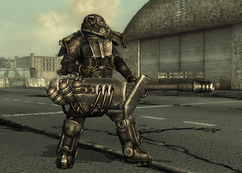 A trooper wielding a heavy incinerator in Adams Air Force Base.

Enclave Hellfire troopers are elite Enclave soldiers encountered in the Capital Wasteland around the year 2277.

Enclave Hellfire troopers are easily identifiable by their unique namesake power armor and signature flamethrower weapons. Often encountered starting at mid to high levels, Hellfire troopers are often paired with 2-3 standard Enclave troopers and occasionally even an Enclave officer, whether on patrol, stationed at an Enclave outpost, or inserted into the field via randomized Vertibird drop-off points. They are tough, and highly persistent combatants who will not let up for a second in a fight, relentlessly firing their weapon at anyone unlucky enough to come into contact with these fearsome soldiers.

Retrieved from "https://fallout.fandom.com/wiki/Enclave_Hellfire_trooper?oldid=3342652"
Community content is available under CC-BY-SA unless otherwise noted.