The Enclave of Appalachia appears in Fallout 76.

During the Great War, government officials fled to the Appalachian bunker.[1] Those who were members of the Enclave were allowed entrance and those who were not were killed.[2] The military locked Enclave members out of their systems, and the bunker was unable to reach Raven Rock or Poseidon locations by radio.[3][4] Without the ability to contact the president or Raven Rock, the leadership of the Appalachian Enclave fell to the Secretary of Agriculture Thomas Eckhart after the death of the Secretaries of the Interior and Treasury.[5]

Eckhart assumed the office and title of president and set about facilitating his goal of launching a retaliatory strike by way of Appalachia's automated nuclear missile silos.[6][7][8] This required an effort to manufacture a threat significant enough outside of the bunker to meet threshold requirements of the automated system.[9] A variety of research endeavors followed, ranging from utilizing robots to manipulating diseases processes, creating and unleashing creatures such as super mutants and scorchbeasts.[8][10][11] Dissenting views of other Enclave personnel resulted in a struggle, ultimately resulting in several deaths, extensive damage to the bunker, and the end of the Appalachian Enclave.[12][13]

MODUS, an artificial intelligence, continued to maintain the facilities of the Whitespring bunker and coordinate surveillance operations on behalf of the defunct group.[14] The facilities control the Kovac-Muldoon Platform support satellite and missiles.[15] Information regarding X-01 power armor and mutation research is also found within the bunker, further explained by MODUS.[16] At the Enclave research facility sought to provide research into various mutated animals found in Appalachia.[17] Ran by SODUS, the group remained in contact with the Whitespring bunker until MODUS cut all contact after claiming there was no use for site anymore.[18] MODUS seeks assistance from the Vault Dwellers from Vault 76 following the conflict that claimed the lives of those in the bunker.[19]

Completing the Enclave questline during the main quest gives access to the Whitespring bunker and the following: 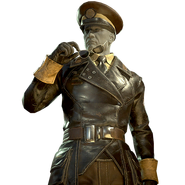