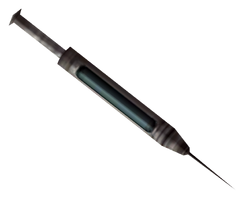 The empty syringe is a miscellaneous item in Fallout 3 and Fallout: New Vegas.

The syringe is a type of pre-War hand-held medical equipment used for injecting or withdrawing fluid or gases from body tissues. This item is made of metal and glass. Known as a hypodermic syringe, this syringe has a glass barrel for containing substances, a metal housing for the barrel, a metal needle for delivery, and a plunger for controlling the flow of substances into or out of the syringe. Empty syringes are often found with other hand-held medical equipment on a compartment tray in various locations, including the Vault-Tec Vaults. The Pip-Boy 3000 categorizes the empty syringe as a junk item.

The syringe is used as Rock-It Launcher ammunition in Fallout 3, and as a component for crafting a stimpak in Fallout: New Vegas.

Retrieved from "https://fallout.fandom.com/wiki/Empty_syringe?oldid=3122714"
Community content is available under CC-BY-SA unless otherwise noted.