No apologies (old)
Agent X (young)
“Have you ever been outside this house since the war? Have you seen what it's like out there?”— Emogene Cabot to her mother, Wilhelmina Cabot

Emogene Cabot is a member of the Cabot family, living in the Commonwealth in 2287.

Emogene Cabot is the youngest and most flirtatious member of the Cabot family. Like her mother and brother, she uses a special serum derived from her father's blood to defy aging and has been doing so since she was 32 years old.[1][2]

During the Great War, while Jack and Edward Deegan were away at Parsons State Insane Asylum, Emogene was responsible for thwarting a takeover of Cabot House by Anders, one of their employees, who tried to forced the family out of the house at gunpoint.[3]

While appearing to be the most frivolous and irresponsible of the Cabots, she is actually quite empathetic and self-aware. An argument can be heard where she chastises her mother for being picky about what food they eat when the rest of the Commonwealth barely have enough to survive. This indicates that Emogene is well aware of how well-off her family is compared to the rest of the wasteland.[4]

The Sole Survivor is asked by Jack to look for her during Emogene Takes a Lover. Upon rescuing her from the Pillars of the Community, she appears to be far older than her brother. With a Charisma check, she can be asked about this and will explain that she has not taken the serum that keeps the Cabots looking young in some time. She refuses to be escorted home, preferring to have a drink first.

After the completion of the quest, she can be found in the Third Rail, looking much younger. She does not say anything more than "Ah, my hero." or "Yes?"

Emogene Cabot appears only in Fallout 4. 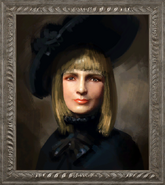