The Emmett Mountain disposal site is a location in the Savage Divide region of Appalachia.

One of several toxic waste dumps operated by the Department of Energy and squirreled away throughout Appalachia, this particular disposal site was designed to leverage the unique geology of the region for the discreet storage of waste. On paper, this site was composed of eight reinforced disposal cells, each rated to hold 128 55-gallon drums of nuclear waste for a total capacity of 1024 drums, the architecture of which was in theory supposed to be safe and reliable.[1] However, reality proved to be a far cry from the design, as just a week after the first batch of waste was delivered, seismometers were set off when a number of the supports snapped and caused a cave-in within the facility. Following this, containment failed, and two inspectors were buried along with the rubble and radioactive waste barrels, resulting in site supervisor Wesley Wiskowski having no choice but to seal off the area and request assistance from Federal Disposal Field HZ-21.[2]

The radioactive contamination that continued at the site and repeated refusals by the brass to provide significant medical assistance - only two doctors were assigned to monitor the state of the employees, and only prodded employees with questions rather than provide medical treatment - resulted in Wiskowski going up to Washington to talk to the people in charge, suspecting that he and his men were being used as lab rats for a study on the long-term effects of radiation.[3]

Shortly afterwards, Wiskowski "abruptly left" and was replaced by Donald Clark, promoted to disposal site manager as a more pliable alternative. Clark made one mistake: He decided to go over every square inch of this facility in order to look for any deficient construction or equipment failures that could be contributing to the accidents. As expected, an extensive survey of the site confirmed that the accident in disposal cell 2 was caused by deficient construction materials, discerned through wooden supports that promptly started to dry-rot and directly contribute to the cave-in. Clark recommended that all seven remaining disposal cells receive metal reinforcements immediately and asked for help in cleaning up the thirty 55-gallon drums of waste lost in the collapse, due to them leeching into the groundwater. Making the same mistake as his predecessor, Clark decided to drive up to Washington, D.C. to talk to his supervisor.[4][5]

Clark "abruptly left" just like Wiskowski before him and was replaced with Amelia Reynolds, who finally understood the goals of the department by cancelling all of Clark's outstanding work orders and cutting even more corners to ensure the costs were reasonable.[6]

Post-War, the site lay abandoned and infested with mutants for many years, as while the dry-rot from many of the wooden supports did indeed collapse, several supports still stood as of 2102, leaving a good portion of the site accessible. Many of the waste barrels would be crushed, leaking or exposing their contents to the open-air, and several mysterious barrels that had been mixed in with waste barrels would burst; spilling out super mutant body parts.[7] A Deathclaw eventually became attracted to the area, using the site as a nest; however, after the recession of the Scorched Plague in 2103, a group of scavengers led by Marion Copeland, cleared the site of its previous inhabitants in an effort to mine the irradiated ore found in the site's depths, as what was intended as a disposal site became a major source of nuclear material and other raw materials.[8]

The entrance to the site is littered with radioactive barrels, and many work shacks can be found outside as well. Many scavengers dressed in Emmett Mountain hazmat suits wander and guard the surface site, with a miner corpse found right before entering the interior's entrance.

Upon entering the main entrance, one will find a small office space inside of a bunker; beyond this there is an assortment of trucks and equipment in a lot littered with radioactive barrels. South of the entrance is a larger bunker, inside of which a terminal can be discovered with logs from before the Great War.

Immediately upon entering, one will find a weapons workbench to the right, and to the left is a locker room where a few hazmat suits may spawn. Past the locker room is a hallway containing multiple decontamination arches which can be activated by a button on the wall.

To the right of the entrance, one will find a locked door inside of a fenced area that houses a power armor station, and may spawn a power armor chassis. Just outside is a console next to a large piece of machinery that may spawn a random plan, along with a fusion generator against the eastern wall.

From the main entrance, one can descend further into the site, and a button on the right side of the wall will activate warning lights and an alarm. Heading further down will lead to a junction that splits off to the left and to the right, with the left tunnel leading to a partially flooded with an explosives crate and a few irradiated barrels.

Taking a right at the junction will lead to an area frequented by a deathclaw, often seen protecting an industrial steamer trunk along the north end of the tunnel between some barrels.

A terminal exists in the game's files with entries written by a waste inspector of Emmett Mountain who was paid by an unknown party to include extra barrels of organic waste alongside the radioactive waste barrels. Upon opening these barrels, he discovered body parts of something with "green skin," but questioned it no further.[Non-canon 1]

While this terminal is unused within the game itself, it implicates both the federal government and West Tek in using the Appalachian dump sites as a means to cover up byproducts of the super soldier program, by hiding super mutant medical waste in discreet sites and covering up the scandal with controlled destruction of said sites.[7] The hope was that the inherent vice of wooden supports would further dry-rot, causing collapsing tunnels, and permanently burying any evidence of human experimentation.

Deathclaw at the bottom of the tunnel 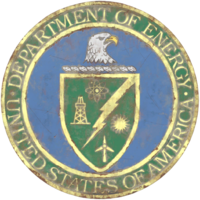