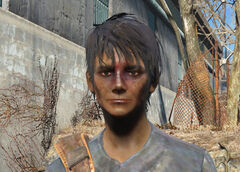 Emma is a deceased member of the Minutemen in 2287.

Emma's holotape, along with Josh's holotape, suggest the survivors of the Quincy Massacre, led by Preston Garvey, holed up in the Super Duper Mart only to be driven out by a pack of feral ghouls, leaving three dead that Emma and Josh, returning from some errand, discovered. They were then killed by the ghouls themselves.

Emma, Josh, and the Minuteman found dead outside the Museum of Freedom are probably the three lost people referred to when Preston Garvey tells the Sole Survivor that "yesterday there were eight. Now, we're five." However, there is another dead minuteman in Concord in a backyard.

Emma's body will despawn if the Sole Survivor enters the area around Lexington and the Corvega assembly plant and enough time passes without finding her.

Emma appears only in Fallout 4.

Retrieved from "https://fallout.fandom.com/wiki/Emma_(Fallout_4)?oldid=3287751"
Community content is available under CC-BY-SA unless otherwise noted.