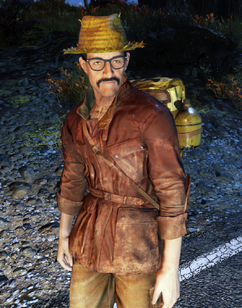 Doctor Emerson Hale is a doctor in Appalachia in 2103.

A former employee of the USSA, Hale used to work with commander Sofia Daguerre and her crew at the Administration decades earlier. He was formally responsible for monitoring the Deep Sleep mission but was also secretly in charge of the negotiation and oversight of Arktos Pharma Project-Z, as shown in his government contract.

Hale took to scavenging after the Great War (and dodging USSA hunter killers), but never forgot about the project. He set up a beacon in Appalachia meant to guide the Deep Sleep mission ship back down to Earth when it could no longer maintain a stable orbit and periodically replaced the beacon's power source. Eventually, the ship crashed and Hale set off to track down any survivors, eventually finding commander Daguerre during The Universe Conspires.

Hale talks with Daguerre and explains he is camped out nearby in an old military base and admits setting up the beacon, but omits most other information, fearing she will find out his involvement in the USSA's experiments on her. Afterward, Hale periodically returns to help Daguerre by giving her emergency kits to help with her headaches after waking up from deep sleep while continuing to answer her questions with half-truths and omissions.

Eventually, Hale admits his involvement with the experiments and assists Daguerre with reaching A.T.H.E.N.A. during Mission Out-of-Control. He encourages using Arachne to destroy A.T.H.E.N.A., but will ultimately not stop the Vault Dweller from transferring the AI to the assaultron body Artemis if they choose to do so. In the end, Daguerre forgives him but says she never wants to see him again. Hale then likely leaves Appalachia altogether, though his exact whereabouts are unknown.

Emerson Hale appears only in Fallout 76, introduced in the Wastelanders update.

Turrets placed at a C.A.M.P. may attack Emerson, causing him to flee. To prevent this, temporarily store the turrets until Emerson is done visiting.[verification overdue]