Jonathan Cook
“Name's Solo. I'm in charge of Talon Squad, which is used for quick armed response. It's easy duty until you're called into action then... it's time to rock! Tell me Brother, what's better than this?”

Paladin Emerald Solo is a member of the Brotherhood of Steel and the leader of Talon Squad in 2197.

Emerald Solo is an experienced warrior, thoroughly dedicated to her work. During the St. Louis battle, it is her quick thinking that manages to keep Talon Squad alive long enough for the Warrior to get to them. On less stressful circumstances, Paladin Solo can be considered a hero. She claims that she isn't a hero, just another warrior doing her job. When she has time off, she likes to unwind with a pleasant game of lawn bowling. She was rescued by the Warrior from St. Louis.

Despite the character's gender, Paladin Solo's voice and voice actor are male. 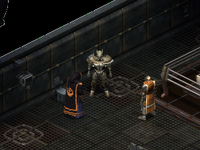