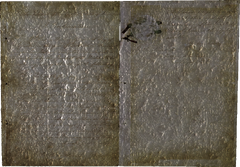 GECK render of the Emancipation Proclamation

“Truly? I can't believe it! The document that freed the slaves.”— Hannibal Hamlin

The Emancipation Proclamation is an item cut from the final version of Fallout 3. It consists of two executive orders issued by United States President Abraham Lincoln during the American Civil War. The first one, issued September 22, 1862, declared the freedom of all slaves in any state of the Confederate States of America that did not return to Union control by January 1, 1863. The second order, issued January 1, 1863, named the specific states where it applied.

Originally, it could have been found by the Lone Wanderer at an unknown location and sold to Leroy Walker[1] or Hannibal Hamlin[2] for 150 caps.

The Emancipation Proclamation was widely attacked at the time as freeing only the slaves over which the Union had no power. In practice, it committed the Union to end slavery, which was a controversial decision in the North. Lincoln issued the Executive Order by his authority as "Commander in Chief of the Army and Navy" under Article II, section 2 of the United States Constitution.

The proclamation did not free any slaves of the border states (Kentucky, Missouri, Maryland, Delaware, and West Virginia), or any southern state (or part of a state) already under Union control. It first directly affected only those slaves who had already escaped to the Union side. Hearing of the Proclamation, more slaves quickly escaped to Union lines as the Army units moved South. Diplomatically, its impact was more immediate. The issuing of the proclamation caused European nations who were contemplating on which side to support to abandon any plans of siding with the Confederacy due to not wishing to be seen as supporting the cause of slavery. As the Union armies conquered the Confederacy, thousands of slaves were freed each day until nearly all (approximately 4 million, according to the 1860 census) were freed by July 1865.

After the war, abolitionists were concerned that since the proclamation was a war measure, it had not permanently ended slavery. Several former slave states passed legislation prohibiting slavery; however, some slavery continued to exist until the institution was ended by the sufficient states' ratification of the Thirteenth Amendment on December 18, 1865.

The Emancipation Proclamation was cut from Fallout 3.

Retrieved from "https://fallout.fandom.com/wiki/Emancipation_Proclamation?oldid=3442263"
Community content is available under CC-BY-SA unless otherwise noted.