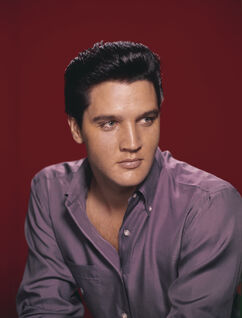 “As far as we can tell, the guy that built this place was considered the coolest of the cool, and taught other people how to be more like him.”— The King, Fallout: New Vegas

Elvis Aaron Presley was an extremely popular American singer of the 20th century. A cultural icon, he is widely known by the single name "Elvis." He is often referred to as the "King of Rock and Roll" or simply "The King." As time had progressed from the Great War, Elvis is merely another semiotic ghost of American culture that is often referred to but, as the Kings exemplify, has been completely forgotten as a person.

Elvis, being a symbol of 1950's music and culture, is mentioned more than once in the Fallout series. Portraits of him can be found throughout the first and second Fallout games.

His presence is more prominent in Fallout: New Vegas with references to his songs and movies in quest names as well as an entire gang known as The Kings who idolize Elvis and have styled themselves after him. The Kings themselves do not know of Elvis' name, which is why they simply called themselves the Kings.

The Enclave membership questionnaire at the Whitespring bunker in Fallout 76 lists Elvis as a possible answer to the question "Which of the following thinkers' belief systems most closely matches your own?" An exam at the Pioneer Scout camp lists Elvis as the correct answer to who the King of Rock and Roll was in the Fallout 76 Wild Appalachia update.

Kings version of the Vault Boy

Kings in Freeside
Add an image to this gallery

Retrieved from "https://fallout.fandom.com/wiki/Elvis_Presley?oldid=3222079"
Community content is available under CC-BY-SA unless otherwise noted.