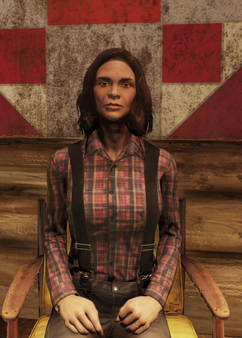 Elsie Taylor is a member of the Settlers residing in Foundation in 2103.

A former enforcer from the Pitt, Elsie was unhappy with life as a Pitt raider and longed for a change. Falling in love with then-enslaved Derrick Taylor and having a son with him only solidified her desire to leave, and they eventually staged a bloody escape where she killed eight raiders on their way out. She suffered minor wounds but managed to keep her husband completely unharmed. The raiders stopped looking for them after she ambushed the first hunting party they sent, but they kept moving and never stopped until they joined the Settlers in Foundation.[1]

She is known around Foundation for her skilled marksmanship, but also helps with the Settlers' construction efforts. She is training her son Davie how to shoot so that he can protect himself, but hopes that they can build up Foundation enough that he won't have to ever use a gun.

Elsie Taylor appears only in Fallout 76, introduced in the Wastelanders update.

Retrieved from "https://fallout.fandom.com/wiki/Elsie_Taylor?oldid=3405515"
Community content is available under CC-BY-SA unless otherwise noted.