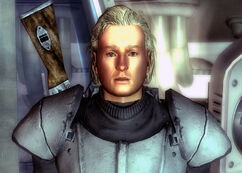 “Yeah, I was considering that too. We can't let the aliens experiment on them any more. It just isn't right. But maybe we should give them a chance to fight with us. It's better to die that way than to live through years of agony.”

Dr. Tercorien worked in a civilian hospital before he was drafted into the United States Army, serving just prior to the Great War. He doesn't recall the exact events that led up to his abduction and has no memory of the time between then and now because he was kept in cryogenic stasis the entire time. Elliott is good with technology and medicine. He's not so good with people, or bravery, or sobriety. While he's capable of defending himself due to military training, he goes to great lengths to avoid getting in situations where defending himself might be necessary.[1]

* These weapons are given to Private Beckett and Sergeant Daniels.

When you ask him what the aliens want with Earth he will make up four different explanations for alien encounters from various sci-fi movies, from Independence Day for the resource consuming theory, from Star Trek for his idea that the aliens seeded life on Earth, from Invasion of the Body Snatchers for his idea of them wanting to replace people on earth by clones, and one theory of earth having inadvertently broadcast radio signals amounting to a declaration of war on them which is a possible reference to Mars Attacks. 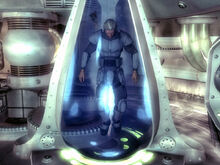 Elliott in the stasis chamber

Retrieved from "https://fallout.fandom.com/wiki/Elliott_Tercorien?oldid=2764954"
Community content is available under CC-BY-SA unless otherwise noted.