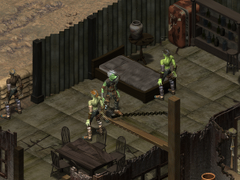 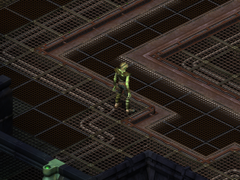 “I don't know how to thank you. I just heard that you got Gorgi's sloppy ass out of trouble. Strangers, I am forever, in your debt. If you accept ghouls in your ranks, we'd be honoured to sign up for your "Brotherhood."”

Elliot Nesting is the leader of a group of ghouls residing in Quincy in 2197.

Elliot is the leader of Quincy's ghouls. He says he is 149 years old and is about to turn a 150 when the Warrior talks to him. Elliot will ask the Warrior to look past the fact that they are ghouls, stating that ghouls also get scared and bleed just like pure blood humans. Quincy requests help to defend the ghouls, stating that despite their inability to offer as many resources as “the Quincy pure bloods” they will still fight but are unable to defeat the deathclaws on their own.

If the Warrior agrees to help and manages to stop the combined Beastlord/deathclaw attack on the ghoul quarter, he will be very grateful for the assistance and impressed with your squads fire power. He will make one more request of you. His friend Gorgi has been captured by the Beastlords and is being held in the house across the road from the Quarter. The same area the attack came from. Gorgi is guarded by two Beastlords. You are asked to rescue him.

If you save Gorgi, Elliot will say that he is “forever in your debt” and would be honored to have ghouls sign up for the Brotherhood. If Gorgi is killed by the Beastlords in the rescue attempt Elliot will be saddened but still grateful. Elliot will then offer some ghouls for Brotherhood training, in the hopes that if ghouls learn to fight, deaths like Gorgi's can be prevented in the future. If you do nothing and leave, ghouls will still be allowed to join the Brotherhood.

* When he reappears in Bunker Gamma, he is only armed with this.