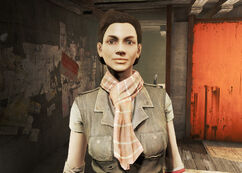 Ellie Perkins is the secretary of private investigator Nick Valentine, operating out of the Valentine Detective Agency located in Diamond City in 2287.

Having grown up in Goodneighbor, Ellie is used to seeing people from all walks of life, something that she occasionally misses.[1] She left Goodneighbor at a young age, eventually moving to Diamond City and becoming secretary of private detective Nick Valentine.[2] As such, she handles his appointments, papers,[3] and even the consoling of distraught clients.[4]

Because she has worked with Nick for years, Ellie has seen Valentine's partners come and go. One such partner was Marty Bullfinch, whom Ellie did not enjoy the company of.[5][6][7][8] Regarding her relationships with other Diamond City residents, Ellie is also a patient of Doc Crocker, having at one point visited him for a consultation. Crocker wanted to follow up on this consultation over drinks.[9] In a similar vein, she believes Earl Sterling may have, before his disappearance, had a crush on her. She will sardonically comment that she is not surprised he ran off.[10] After learning that Doc Crocker was behind Earl's disappearance, she will joke that she is glad that they never followed up on said consultation.[11] Myrna distrusts Ellie, believing her to be a synth and claiming that it is "obvious" she is not human[12] (though Myrna's suspicions are completely unfounded).[13]

After Nick decided to investigate the supposed kidnapping of Darla by Skinny Malone's Triggermen, he became imprisoned in Vault 114.[14] Ellie had warned Nick that the rumors of the Triggermen occupying the Vault were most likely a trap, but Nick, in his usual fashion, just smiled and walked out of the door.[15] Nick has since been declared missing, and Ellie is heartbroken that her employer and close friend is gone, and possibly deceased. She is frustrated with herself that she does not have the combat abilities to "charge across the Commonwealth" and rescue Nick herself without ending up dead.[16] Upon the Sole Survivor's arrival in Diamond City, Ellie is packing up Nick's belongings from the office, assuming the worst and preparing to close the agency for good.[17][18]

Ellie is a gentle and kind person[4][21] who truly cares for Nick.[22] Nick, similarly, cares for Ellie and appreciates her hard work,[23] though this concern for Ellie goes to the point of withholding some details from her, so as to not worry her.[24] Ellie's concern for Nick's well-being usually stems from his frequently non-chalant reaction to warnings of danger, usually given to him by Ellie.[25][26] However, she shares Nick's unique sense of humor, leading to banter between the two of them around the office.[19][27][2] She has thought about Nick's status as a synth before, but it has never truly bothered her, and the thought never enters her mind anymore.[28]

Ellie Perkins appears only in Fallout 4.

Retrieved from "https://fallout.fandom.com/wiki/Ellie_Perkins?oldid=3410742"
Community content is available under CC-BY-SA unless otherwise noted.