Nuclear Breezed
“July 15, 2079. Wow. Who would've thought a little radiation would turn this world upside down? We were down in those bunkers for what, a couple years? There's no way radiation did all this by itself in that amount of time.”— Ella on the Mire, Ella's log: The Mire

Ella Ames was a member of the Free States and one of the occupants of Ella Ames' bunker.

Before the Great War, Ella Ames earned a Ph.D. in medical science from Vault-Tec University[1] and worked as a doctor. She also had knowledge of holistic medicine taught to her by her mother.[2] West Tek research center attempted to recruit Ella, but she turned them down and later joined the Free States. West Tek would later plan to use her father's failing health as an opportunity to pursue recruitment further.[3]

Ella survived the Great War in her bunker. A couple of years later, the Free States members emerged from their bunkers. On July 15, 2079, Ella recorded a holotape, expressing her shock at seeing the newly formed Mire region.

On May 2, 2080, Ella recorded another holotape about how rebuilding Harpers Ferry was tough work. She had recently met a group of Responders, including Derek Castle, who offered to help.

Ella attended survival training at Camp Venture with a group of other Free States members in 2081. The trainer took special notice of her, noting her impressive skills around firearms, dressing game and even wrestling.[1]

Ella provided vital medical services for the other members of the Free States. She also conducted research on the flora and fauna of the Mire, which had become much more heavily mutated than in other parts of Appalachia, and developed theories on their origins.[4] During the rebuilding of Harpers Ferry, Ella set up a a clinic with the help of the Responders.[5] She was excited to work with Abigayle "Abbie" Singh, but Abbie resigned due to social difficulties from dealing with the Responders.[6]

Ella also extensively studied the Scorched and the Scorchbeasts following the Free States' loss of Harpers Ferry to the Scorched. She discovered that if a Scorchbeast is blasted with a certain frequency, it disorients it long enough for fighters to be able to go in and defeat it.[7] She attempted preliminary work into analyzing new diseases and developing a radiation shield known as RadShield. Ella was also studying deathclaw feces due to their radiation properties and named their droppings "bone meal." With the help of Abbie, Ella was able to develop a tracker to help her find the bone meal.[4] Ella helped Niraj Singh with the Scorched Detection System, as she discovered the Scorched have a unique, albeit weak, radiation signature. Niraj tasked Ella with delivering Abbie a holotape in case he died.

Jacob Lerner and Charlie Walker were both attracted to Ella. While Ella did not find Charlie highly intelligent, she found him easy on the eyes, and he offered himself as a subject for her research experimentation.[4] To retrieve flowers for Ella as part of her research, Charlie convinced Jacob to go to the Valley Galleria on what was unknown to Jacob to be essentially a suicide mission. Although Jacob found the flowers and barely survived, Charlie confronted Jacob outside the building, murdered him, and delivered the flowers to Ella himself.[8]

Ella perished sometime before 2102. Her body can be found on the upper level of Southhampton Estate in the Mire.

Ella Ames appears only in Fallout 76. 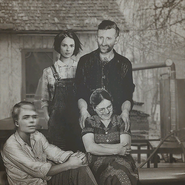 Ella (back left) with her family