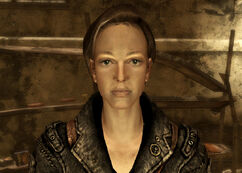 “Welcome. There's food and water here for any citizen of the NCR. Please, have some.”

Major Kieran is leading a mission to provide food to citizens of the New California Republic who live in Freeside. With help from the NCRA Supply Corp,[1] Kieran has been giving handouts to proven NCR citizens but has been running into trouble with local Freesiders. Originally, Kieran was going to oversee a relief effort that would've benefited both NCR citizens and Freesiders, but because the envoy sent to The King that was meant to coordinate this was brutally beaten and nearly killed; following this incident, the relief mission got scrapped by the Supply Corps' commanding officers. But Kieran was not deterred and still got clearance for the mission, but with reduced supplies and support.[2]

She would like to have friendly relations with the Kings, as shown by her willingness to send an emissary to The King, but men like Pacer have prevented this from happening.[3][4] And because of the envoy incident, Kieran is strapped for supplies to hand out, and is also unwilling to hand out supplies to Freeside locals.[2] Though, she will sneak an extra ration to citizens if they have a friend that's a Freeside local.[5]

Major Kieran is a friend of Julie Farkas and is the reason that Kieran likes the Followers of the Apocalypse, unlike other members of the NCR who may not see eye-to-eye with the group.[6][7]

G.I. Blues: Speaking with her, she will tell the Courier about her current mission. If they speak to Julie Farkas at the Old Mormon Fort beforehand, Major Kieran is willing to provide more information about her mission.

Retrieved from "https://fallout.fandom.com/wiki/Elizabeth_Kieran?oldid=3322802"
Community content is available under CC-BY-SA unless otherwise noted.