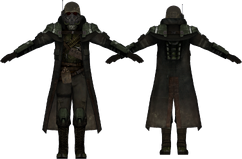 The elite riot gear is a unique armor and the most advanced model of L.A.P.D. riot armor, superior to the pre-War 11th Armored Cavalry Regiment riot armor. Originally an 11th Armored Cavalry Regiment riot armor that was modified over time, it was the personal armor of an NCR riot control officer in the Divide, supervising the NCR riot operation in the Third Street Municipal Building before its destruction.

This set of gear has more attachments when comparing to the advanced riot gear. Aesthetically, it lacks the 11th Armored Cavalry emblem on the helmet but instead has a white U.S. Army star on the side. It has additional green tubes on its enhanced gas filter as well as an antenna connected to the flashlight on the right side of the helmet. There is also a canteen attached to the belt and a bandolier that spans across the chest plate, along with a strap of pouches. The gray duster is greener than the dark brown advanced riot gear, and it features reinforced shoulder plates and armored knee guards, which are not seen on any other variation of riot armor. It has recoil compensation materials woven into its arms, making it easy to aim and take down targets with gunfire. The helmet is equipped with advanced optics and a night vision unit which interfaces with riot armor to provide night vision.

The elite riot gear bears a high level of protection for its weight. It is among the best medium armors. Its Damage Threshold is equaled or surpassed only by a handful of other equipment pieces but it has the benefits of lower weight and higher item HP. Its item HP of 750 is the highest of any medium armor in the game and it is also one of only seven equipment pieces to boost Critical Chance. The elite riot gear has the highest value of all the armors in-game, making it very expensive to repair through merchants.

The riot gear helmets are of the very few headgear pieces that are considered "Heavy" apparel and thus cannot be repaired by most other headgear, even with Jury Rigging. However, it can be repaired with heavy body armor such as metal armor. It can also be repaired with the ranger helmet. Despite being listed as heavy, however, it can still be worn with light armor perks, as the helmet isn't added to the "bad armor" list.

Like the other riot gear variants, the helmet gives a night vision effect (called "Red Scare"), which gives the user low-light visibility while in sneak mode between 6:00 PM to 6:00 AM or while indoors. The effect is only active while the Courier is sneaking and seems to differ depending on time, with red night vision at 12:00 AM, and lighter green in darkened areas during daytime hours. Playing Caravan while the sneak sight is activated may make it difficult to see the cards. 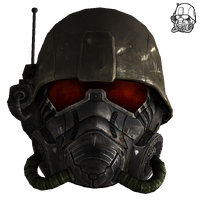 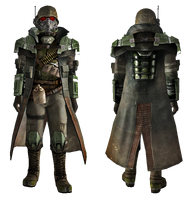