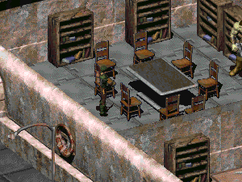 Free the slaves in the slave pen, for the Rangers

“We believe slavery is wrong and we'll do what we must to fight it. In NCR, we got a lot of friends in high places. Thanks to them we've already banned slavery down south, but now we're hoping to spread the word north.”

Chief Elise is the commander of the NCR Rangers in 2241.

A pretty young woman in combat clothes, Elise is used to giving out orders and projects an aura of confidence and lack of patience for nonsense and small talk.[1] She's got a no-nonsense air about her, as she's used to giving orders and having folks obey them.[2] Her experience and talents earned her the position of the leader of the NCR Rangers, a paramilitary group focused on the destruction of slavery throughout NCR territories and outside of them. Their efforts have already led to the banning of slavery in NCR proper, thanks to a lot of support from friends in high places.[3]

Her activity helped shape the Rangers and eventually organize them into an elite formation of the New California Republic military. In 2271, the now elderly chief was one of the masterminds behind the Ranger Unification Treaty, orchestrating the merger between the Desert Rangers and the NCR Rangers.[4]

Free the slaves in the slave pen, for the Rangers: If the Chosen One is not a slaver, they can gain membership to the Rangers by completing their test: killing Vortis and freeing the slaves in his holding center. If they bear the tattoo, however, they will just be run out of town.

Chief Elise appears only in Fallout 2, though she is mentioned by President Kimball[4] and Chief Hanlon[5] in Fallout: New Vegas.

Retrieved from "https://fallout.fandom.com/wiki/Elise?oldid=3261715"
Community content is available under CC-BY-SA unless otherwise noted.