Rapid Reload
(-0.8s)
“We were sending robots to stop him and he was slicing and cutting through their shells with some suped-up laser gun like they were cheese... paper.”— Doctor 0

This weapon is identical to the LAER in appearance, but differs in ammunition capacity by having five fewer shots per magazine and a slightly increased rate of fire. This gives it a higher damage-per-second (DPS), but also makes it much less durable. Given the original variant's fragility, its condition is a major concern, especially when using over-charged, optimized, or max charge ammunition.

Elijah's advanced LAER can fire a total of about 245 times using standard cells, the equivalent of 17 reloads (or 13 reloads when modified with the auxiliary recharger chip), from full condition before breaking.

Both of the mods for the standard LAER can be applied to this weapon: 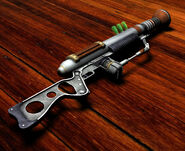