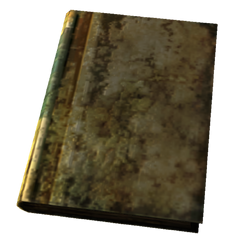 It's the second journal written by Elijah while he was exploring the Big MT, after he left the Signal Hills transmitter and his first journal named torn journal page on site.

It can be found at Elijah's Watch which is located just north of the Securitron de-construction plant and just east of the Mysterious cave, leaning against the antennae closest to the camp's electric hot plate.

This camp's better than the one I set up on top of Signal Hills roof, clear broadcast line to its radio tower and good vantage point on North Tunnel. Set up a turret perimeter and transmitter, should be able to control the trains via remote to escape before any robots come. The broken Securitrons make a good defense line, apparently brains in center Dome can't control them like they do the others.

No sign of courier - or that woman. Turns out I was right at the Yangtze Camp, I was being watched there, probably Brotherhood assassin out to "sentence" me. She got hers, though. After the robot attack, saw her get hauled away to the southeast by medical robots... probably joined the lobotomite ranks here, don't have to worry about her anymore.

In this note, Elijah discusses his last observation post he established at the Big MT. The first post was located in the Little Yangtze watchtower. It was here he experimented with the bomb collars worn by Little Yangtze's inhabitants, which he then used to force the Courier along with Dog and God, Christine, and Dean Domino to free him from the Sierra Madre in the Dead Money add-on. At this post he also noticed for the first time someone watching him. This person turns out to be a Brotherhood of Steel assassin named Christine who had been sent to eliminate Elijah after rampaging through the Mojave. After he leaves this post he moves to another camp atop the Signal Hills transmitter where he is able to improve his radio connection with the antennae array at the site. Finally he leaves his camp at the Signal Hills transmitter and moves to the location of Elijah's Watch.

Retrieved from "https://fallout.fandom.com/wiki/Elijah%27s_Watch_journal?oldid=3325199"
Community content is available under CC-BY-SA unless otherwise noted.