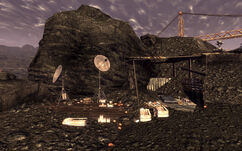 “Your Elijah, he met the Gods in this place, did a good job of making them question the way of things.”— Ulysses, to Christine Royce

Elijah's Watch is located northwest of the Securitron de-construction plant and east-southeast of the mysterious cave. It is most easily accessed by starting at the north side of the de-construction plant. Behind the plant is an overturned military truck with several metal boxes, footlockers, and other containers scattered around it. From this truck, a trail of drained energy and microfusion cells lead directly to the camp via the only approach not protected by turrets.

The area is mostly made up of cliffs and rock, sheltering Elijah's camp from view. The camp itself is located behind several large boulders and is protected by two Mark IV turrets. It also houses a bedroll, an electric hot plate, several broken ham radios, and two satellite dishes.

Picking up Elijah's jury-rigged Tesla cannon will cause three damaged and/or berserk Securitrons to appear east of Elijah's Watch, near the radar fence.

Elijah's Watch journal
Add a photo to this gallery
Retrieved from "https://fallout.fandom.com/wiki/Elijah%27s_Watch?oldid=3498771"
Community content is available under CC-BY-SA unless otherwise noted.