BeardFullOld
“Whoever designed the Sierra Madre... their obsession with messing with frequencies and signals...”

Father Elijah is a former elder of the Brotherhood of Steel in 2281. He serves as the primary antagonist of Dead Money.

A scribe of the Brotherhood of Steel, Elijah defied convention and rose to the rank of elder, an honor usually reserved exclusively for paladins. An exception was granted for him, on the grounds of him being a genius, able to figure out the workings of a device just by looking at it.[1][2] His scientific acumen was matched only by his drive to recover and develop technology. His approach towards technology, iterating and improving, rather than simply preserving it, was considered unorthodox by his peers.[3] Elijah often dispatched scribes on tech retrieval missions, chasing all the leads he found.[4][5] His drive to develop new technologies put him at odds with the more conservative members of the Brotherhood, particularly other elders. The conflict developed as Elijah pushed for developing new technologies and new, ethically questionable weapons. The elders, rather than deal with him, decided to send him away, east, to form a new chapter of the Brotherhood in the Mojave.[5]

Elijah revealed himself as a brutally pragmatic and altogether unpleasant leader. A pathological control freak, he would often view the people under him as mere equipment, expecting them to carry out his orders and requests unquestionably, while dissent or unpredictability on their part would not just annoy, but even outright infuriate him. Elijah also detested face-to-face interaction, preferring to keep his human interaction via terminal screens and would predominantly use terminal messages to send scribes on missions into the Mojave on tech leads.[4][6] By far the only person with whom he had any kind of working relationship (but still largely terminal communicated) was Scribe Veronica Santangelo, his pupil. Elijah might have used his status to end her relationship with Christine Royce, so that she would follow him into the Mojave. Veronica was kept in the dark about the affair, and her reverence of Elijah only increased.[7][8]

Elijah had partly been sent east to investigate the Hoover Dam and the possibility of bringing it back to functionality. However, the Brotherhood was not quick enough and the New California Republic had claimed it shortly prior. Elijah was furious, likening it to "children playing with a bomb."[9] Instead of the dam, Elijah turned the Brotherhood's focus onto the HELIOS One solar power facility. Elijah's obsession with Helios and the need to defend against NCR forces deploying into the Mojave resulted in the Brotherhood ignoring the expansion of the Van Graff family into the Mojave, despite them distributing pre-War energy weapons. The elder's orders were clear.[10]

It was not until Operation: Sunburst that Elijah's true nature became apparent to the rest of the Brotherhood. It was clear that the Brotherhood were on the losing end of the conflict, but Elijah refused to accept defeat and became obsessed with finding the technology required to defeat the NCR. Operating from the Brotherhood's HELIOS One base, he sent paladins out on a number of missions that could be considered tactically questionable in efforts to secure vital technologies he was adamant would swing things in their favor. He eventually discovered that the secret to victory lay on his own doorstep, with the ARCHIMEDES II weapon. Though the Brotherhood's position was tactically unsustainable, Elijah felt that if he could just get ARCHIMEDES functional the NCR could finally be pushed back.[9] He stubbornly refused to give ground but salvation never came and when the NCR finally overran the perimeter, Elijah simply disappeared into the wastes without a warning to anyone, not even Veronica, and was assumed to have deserted the Brotherhood. His successor, Nolan McNamara, wasted no time in gathering up the few that survived the battle at the facility and retreated to Hidden Valley.[6][11]

But Elijah had not truly abandoned the Brotherhood nor his desire to see it dominant, but had in fact left to find new technologies that would save them; to find what he believed were treasures of the Old World.[12] For Elijah, the Brotherhood was doomed; they needed to begin again and he would do whatever was needed, no matter how morally questionable, to ensure that came to pass. He traveled throughout the wasteland, going as far as the Divide and spending time among the Ciphers.[13]

Eventually, Elijah stumbled across the Big Empty in his travels, where he found an incredible amount of rare pre-War technology. Captured temporarily by the Think Tank upon his arrival, he managed to escape in seconds, much to the shock of the brain bots.[14] In the great expanse of Big MT, Elijah ran into another human, a courier named Ulysses, who spoke to him of the legend of the Sierra Madre and convinced Elijah to journey there to find what he sought.[15] Before he could embark upon the Sierra Madre, Elijah had to make a few preparations. Making his way to Little Yangtze, he experimented on the survivors of the prison camp with explosive collars while, curiosity getting the better of him, seeking out the radio frequency until finally tracking down a faint broadcast.[16] Avoiding the local robots and suffering from migraines through the overuse of Mentats, Elijah fine-tuned both the collars and the radio signal.[16] Now, with the location of the mythical casino and his collars ready, his grand plan to defeat the New California Republic was ever so close to fruition.

However, the trail of crimes he had left across the wastes in the years preceding his arrival had not gone unnoticed, and the internal affairs of the Brotherhood soon dispatched assassins to stop him, Christine Royce being one of them. As the Think Tank sent robots to contain him and, catching a glimmer from a sniper scope, Elijah instinctively sensed the worst.[17] Strategically detonating his subjects' collars to make his getaway as she attempted her assassination, Elijah defeated Royce. She became a subject for medical experimentation after being dragged away to the Y-17 medical facility.[18] He then moved on and set up a camp on the roof of the Signal Hills transmitter and later on the cliffs near the Big MT north tunnel where the uncontrollable broken and berserk Securitrons provided him defense.[19] Hacking into the Think Tank mainframe as the Big MT's robots closed in, Elijah fried Doctor 8's voice module and rerouted Doctor 0's processors to take control of the train network. Via remote control, he directed a train into one of the tunnels, creating a path for his escape through the wreckage.[14] Leaving his retrofitted LAER rifles and jury-rigged Tesla cannon behind, he then set off towards the Sierra Madre with a Gauss rifle and, crucially, the knowledge that could make the Mojave his, and his alone.

To prepare for his expedition, he renovated an abandoned Brotherhood of Steel bunker as a base of operations in the Mojave, setting it up for when he managed to get his hands on the technologies it offered. In making round trips around the Sierra Madre to his bunker, he performed analyses of the Cloud and the Sierra Madre's environment. Once ready to go to the Sierra Madre, he left a final message for Veronica in the event he did not return.[20]

Upon reaching the Sierra Madre, he found everything that he had hoped for and more. The Cloud had somehow preserved the pristine nature of the casino and prevented it from decaying in all its centuries of disuse, in addition to serving as a deadly deterrent to potential intruders. He marveled at the casino's automated security systems: the invulnerable holograms, perfected versions of the technology he had found at the Big Empty. A single one of these holograms, deployed in the right place, would become a one-man army, massively powerful and almost impossible to defeat with conventional weapons.[21] However, the potential of these paled in comparison to a relatively innocuous technology: the Sierra Madre vending machines.

These machines utilized Sierra Madre chips and used the raw material in their composition to assemble various items, such as alcohols or clothes. The potential for these had already been partially realized before the War, as medical staff and construction crews had used them to generate medical supplies and explosives; but Elijah had grander ideas. He could use the vending machines to create everything necessary for building a new nation: food, supplies, ammunition, collars, even currency. His ultimate plan was to cleanse the Mojave with the Cloud and create a new world, using the holograms for defense, the collars to ensure compliance, and the vending machines for resources.[22]

However, Elijah also found that he could not unlock the secrets of the casino's vault alone. He used his explosive collars to coerce captives into trapping other fortune seekers lured by the Sierra Madre's signal, forming a chain that eventually grew into teams conscripted to do Elijah's bidding or die. Eventually, he found a new way of starting the chain in the form of Dog, a nightkin whose overwhelming need for a master figure allowed Elijah to bend him easily to his will even without an explosive collar. Human nature got the better of these teams though, and as soon as they became close to the treasure they all felt they could take it for themselves, inevitably turning on one another.[23] One team managed to actually get Elijah into the heart of the casino, but after their deaths, Elijah found himself trapped and alone.[24] In response, he modified the signals controlling the collars to add an extra condition: if one person died, they all would die. Unable to communicate with Dog and the outside, Elijah assumed this would be his end, until Dog, automatically acting on orders given to him long ago, brought to the casino a prisoner with a Pip-Boy 3000, someone with who Elijah was capable of communicating.[25] Elijah would be free to go, assuming he could bear to leave behind the casino and all its secrets.

Effects of the player character's actions

Elijah is killed fighting the Courier
Elijah meets his end abruptly in the vault, where he fights the Courier and falls in single combat. His corpse, along with that of Frederick Sinclair, lies in the now totally inaccessible vault forever.
Elijah is locked in the vault
Elijah, lured by the promise of the Sierra Madre, cannot escape. Once inside the vault, the casino does not let go. When Elijah finally passes away, the casino creates a new hologram to walk with the other ghosts that fill its casino. It is a pre-programmed homage intended for another. It assumes a new meaning in the likeness of Elijah. A means of allowing even the dead to begin again.

In the base game, Veronica's responses to the Courier's description of Elijah's fate are disguised to avoid revealing plot elements of Dead Money before it was released. Dialogue in this conversation refers to a ghoul named "Abraham" who was presumed dead but healed in "the Crater" and has now "gone north, into ghoul country," and another ghoul named "Monte" who the Courier had to either kill or trap in a subway tunnel in order to retrieve an "accelerator." Dead Money overwrites the Courier's lines with ones about Elijah.

Christine and dead Elijah in the cut endings slide 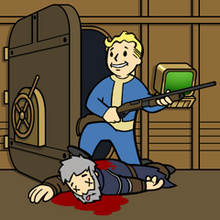 As depicted in Cash Out 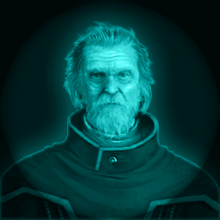