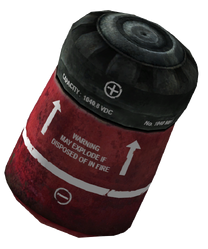 The electron charge pack is a type of ammunition in Fallout: New Vegas.

These small electron batteries are used as ammunition by several energy weapons. Unlike energy cells and microfusion cells, they are used to power rapid-firing energy weapons, as well as Tesla weaponry.

Electron charge packs can be converted into, and from, other energy weapon ammunition types (i.e. energy cells and microfusion cells) at a workbench, with the appropriate Science skill.

The player character can also combine partially charged cells together to make more powerful variants that improve damage and bypass more enemy DT but will burn out the weapon's components faster.