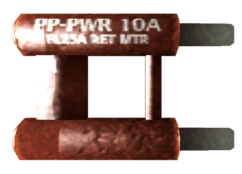 The electric box fuse is a quest item in the Fallout: New Vegas add-on Dead Money.

Electric box fuses are "weak link" safety devices that cause a circuit to break if the flow of current through a circuit is too strong. This is achieved by the fuse wire melting when the current exceeds a specific ampage, thus breaking the circuit. Once the fuse has blown, it must be replaced before the apparatus it has been installed in can be used again.

All four can be found in the Puesta del Sol area.

Due to the fuses being quest items, if they are not used to repair the fuse box they will remain in the Courier's inventory and will not be removable even after the completion of the Mixed Signals quest.

The toolbox on the balcony

Toolbox in the Cloud

Toolbox near a board

The toolbox in the Puesta del Sol switching station

The three toolboxes in Puesta del Sol
Add an image to this gallery
Retrieved from "https://fallout.fandom.com/wiki/Electric_box_fuse?oldid=3157570"
Community content is available under CC-BY-SA unless otherwise noted.