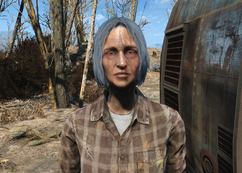 Eleanor is a trader in the Commonwealth in 2287.

Not much is known about Eleanor except what can be found in Eleanor's note. She apparently has some history with the raider Bosco and his gang from D.B. Technical High School, and this resulted in the large scar down the left side of her face.[1]

She has a large stock of ammunition for sale, making her an ideal merchant to stock up on rare and large amounts of ammo.

If the Sole Survivor finds and releases the dog Teddy, he will run to Eleanor's place and follow her around thereafter.

Eleanor appears only in Fallout 4.

Eleanor's note
Add an image to this gallery

Retrieved from "https://fallout.fandom.com/wiki/Eleanor?oldid=3204912"
Community content is available under CC-BY-SA unless otherwise noted.