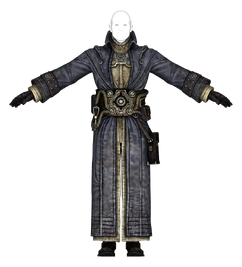 A variant of the classic blue elder robes, this one is a triple-layered outfit. The base is a black, reinforced jumpsuit with combat boots, with a loose beige robe and high collar worn underneath, reinforced with metal components like the recon armor. A blue overcoat is worn on top, providing additional protection from the elements, with an utility belt fitted with various devices and tools, depending on the elder's preference.[1]

A cosmetic item, with a Damage Resistance of 3. The armor is not intended to be obtained in normal gameplay, as it does not have a unique icon (uses the Vault 101 jumpsuit's) or a female version of the armor. If a female character equips it, they will appear with no right hand and wear the Vault 101 jumpsuit. Finally, the large sleeves will clip and cover the Pip-Boy screen, making it impossible to use. Hotkeying the armor first is a good way to avoid problems.

Worn by Elder Owyn Lyons at the Citadel. They can only be obtained by planting an armor with a higher Damage Resistance on him. It is possible to obtain two copies, by stealing one, then finishing the game and beginning Broken Steel.

When dropped, it is identical to a Vault 101 jumpsuit in appearance.

Female version and the Pip-Boy coverage