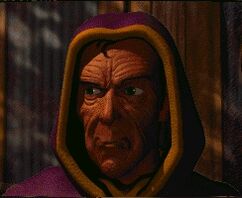 “I have a favor to ask of you. I promise that you will be well-rewarded for your services to this community.”

The Elder is a resident of Shady Sands in 2161.

Not much is known about the current elder of Shady Sands as of the events of Fallout. He is one of the oldest residents of Shady Sands, and has been living in Shady Sands for a long time, possibly back to when Aradesh first founded the town.

The Elder as a talking head can be seen only in pre-release Fallout materials and certain merchandise or packaging. They do not appear as a complete set of images, only a single frame. He does appear to be motional in the 1996 preview, but not shown talking. Morpheus' head looks identical to his.

The Elder was to appear in Fallout, but was cut from the final version of the game. Though his dialogue file can still be found in the MASTER.DAT, it is unused. He also appears in the 1996 Vault 13 preview.

The Elder's head as found on the Fallout Trilogy pack
Add an image to this gallery
Retrieved from "https://fallout.fandom.com/wiki/Elder_(Shady_Sands)?oldid=3329334"
Community content is available under CC-BY-SA unless otherwise noted.