The El Rey Motel is a location in the Mojave Wasteland in 2281. It is found to the south of Freeside and directly west of Camp McCarran. The close proximity to the former airport suggests that it catered primarily to travelers to McCarran International Airport before the Great War.

The El Rey Motel is a motel similar in appearance to the Dino Dee-lite Motel in Novac. However, the El Rey is a great deal more dilapidated, and its inhabitants seem to be mostly destitute chem addicts. Most of the doors to the rooms of the El Rey motel are blocked up by debris and are therefore inaccessible.

There are a few exceptions, including one room on the bottom floor, which is filled with bark scorpions and a dead wastelander, and two rooms on the top floor with notable loot behind Very Easy locked doors. The room on the bottom floor belonged to someone who borrowed money from a loan shark but failed to repay it. One of the rooms on the top floor houses a hostile crazed chem addict, while the other also contains a dead wastelander.

The El Rey Motel is based on the real world location of the same name in Searchlight, Nevada, differing from the in-game geographical location. 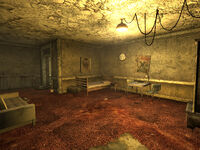 Room with the bark scorpions 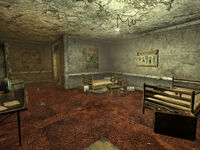 Room with the dead wastelander 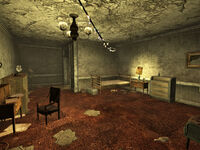 Room with the crazy chem addict

Freddy Fear's House of Scares poster in a room upstairs

The El Rey Motel as it appears in the opening scene of Fallout: New Vegas
Deutsch Español Русский Українська 中文
Community content is available under CC-BY-SA unless otherwise noted.
Advertisement