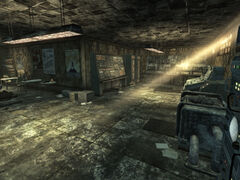 “My folks back home have lights at night thanks to what we're doing here.”— NCR trooper, Fallout: New Vegas

The El Dorado substation is a building near HELIOS One in the Mojave Wasteland. It is located southwest of Vault 11 and northwest of El Dorado Dry Lake.

The location consists of a single building and a large array of transformers. The building itself is a tall concrete structure with a garage door entrance and a barricaded side door. In front of the building, on its east side, is an empty dumpster and a short distance from the north side's outer wall is a collapsed power line frame.

There are eight NCR troopers guarding the area, one being a sergeant, some of which may be sleeping in the building. The guard will instruct the player character not to enter the building or the fenced-in area, whereupon if they do, the soldiers will become hostile. No matter what reputation the Courier has with the NCR, the troopers will not allow entrance to either restricted area.

The El Dorado substation appears only in Fallout: New Vegas.