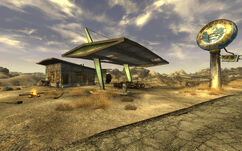 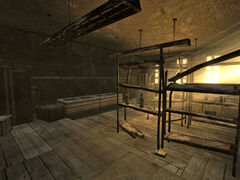 El Dorado Gas & Service is a location in the Mojave Wasteland, located just due northeast of the HELIOS One site and southwest of Boulder City, right next to the highway.

It contains a campfire for crafting and also several makeshift beds outside. Two Viper gunslingers and a Viper leader reside near the signs close by. Those not in good standing with Caesar's Legion will often be ambushed upon fast traveling here. The assassin team usually includes one of each of the following: a centurion, a decanus, an explorer and a vexillarius, all with high level weapons. After killing all Vipers, there may later be a prospector who can be killed without Karma loss.

Retrieved from "https://fallout.fandom.com/wiki/El_Dorado_Gas_%26_Service?oldid=3034249"
Community content is available under CC-BY-SA unless otherwise noted.